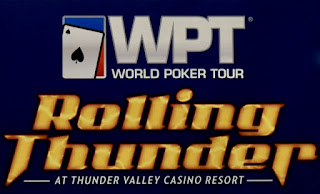 Kao Saechao moves all in for his last 33,500 and Justo Avalos calls, having Saechao covered by a single 500 ante.

There's a 3 in the window and Avalos is left with a single ante.

The next hand Ryan Nishizaki gets JJ, another player gets 77, Avalos has Q5 ... there's no help to the either two players and Nishizaki scores a double knockout.

Time for hand-for-hand on the money bubb ... um, nope, there was the double-bustout I just wrote about on an outer table ... and a third table also had a double-knockout --- make that 6 eliminations on essentially the same hand and we're at 45 ... no bubble, everyone left is in the money.