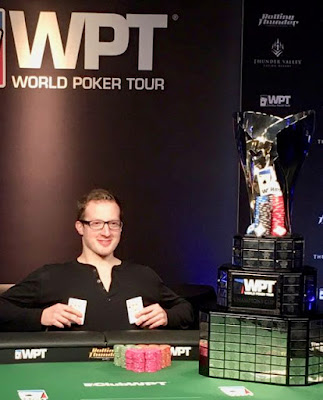 @3kingme3 - Mike Del Vecchio took the overall chiplead last night with 4 tables left in the WPT Rolling Thunder Main Event, and but for a very few hands he maintained that chiplead through to the end.

Del Vecchio is the 2017 Rolling Thunder Main Event Champ, earning $284,638 for the win. This includes a $15,000 entry in to the WPT Tournament of Champions at the end of the season.

Del Vecchio navigated a final table that included four other pro's - Sorel Mizzi, Steven Tabb, Connor Drinan and Olivier Busquet - along with amateur player John Hadley who won his way in via a Livemore Caasino freeroll.

At the end, it was Del Vecchio's trip 4's holding up against the open-ended straight flush draw of Mizzi on the final hand of the tournament.

Here is the overall results from the event.