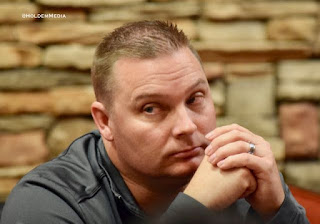 Shawn @Sac_Poker Roberts made @WPT $3500 Main Event via a $90 Step Satellite early this week. He played Sunday's Day 1B and lost two-thirds of his starting stack in the first few levels.

Good thing for Roberts that these are hour-long blinds for the WPT Rolling Thunder. He showed a lot of patience the rest of Day 1B and chipped up to 52,900 by the end of the night.

His Day 2 starting table just broke, and it's partially his fault.

Roberts calls for just about his entire stack when his challenger shoves the river on a King-high board with 3 diamonds. Roberts is holding AK - no diamonds - and his challenger shows KJ, also no diamonds, and when the chips are counted out it is Roberts with the KO, moving to 130,000.

Did you also make the Main Event on a $90 Step Satellite? Come over to the Hold'em Radio updates table in the tournament area and tell me your story.