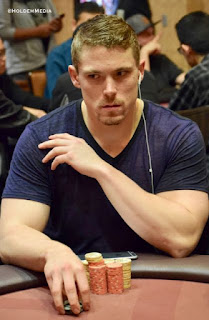 First it is Mimi Luu doubling through Mario Lopez 89 > A9 aipf as Luu hits the 8-8-x flop to stay alive.

Then it is Ying Vang doubling through Alex Foxen (above) AK > AQ, cutting Foxen down to 4BB.

Foxen is in the BB the very next hand, Luu puts him all in and he finds a fold. All in the next hand from the SB against chipleader Ajay Gnanasambathan and ahead KJ > KT for a double.

Luu takes a few hands down uncontested preflop because she's still raising 4.5x preflop and others aren't playing that high.

A few hands later Foxen is all in for his last 7BB with 99 against the AKdd of Lopez. The board goes 8-high and now it is Lopez down to 5BB.