The Chris and Mario Party 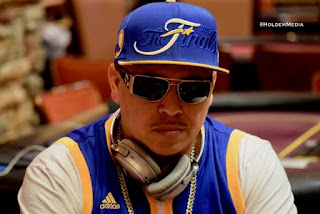 @RaiderMario707 and @RUKidingMe44 have been going at one another for two days now - all in good fun (and a rumored bounty on each other) - and it spilled over in to the final few tables here in the $250,000 guaranteed DeepStack. 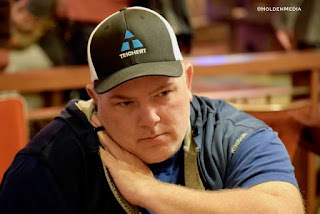 Side-by-side for the Day 2 redraw, their table has been one of the most entertaining, and it became much more so as the 27-player redraw approached.

Action folds to Chris Hinchcliffe in the SB and he ships it. Mario Lopez barely has Hinchcliffe covered, and he's definitely calling for he woke up with AA. Hinchcliffe has Q-T.

Yeah, there's an Ace on the flop, but a King also, so the gutter exists ... and that hits on the turn ... Hinchcliffe survives. About 20 people gather around because you'd think one of them just won the $75k up top, based on the celebrating and laughing going on.

Lopez doubles the next hand, then moves in with JJ and is called by AJ.

Ace on the flop ... Jack on the river, Lopez survives this one but the side-by-side party is over. Time for the redraw and they're at different tables now.