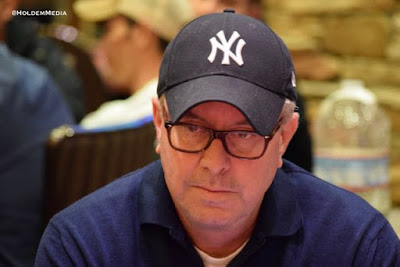 @WPTDeepStacks @PokerAtlantis Series Champ Bill Watchman looks up from the BB and sees not only has Kevin O'Donnell moved all-in for his last 32,000, but Cary Marshall has made the call from the SB.

Being caught in between Marshall and O'Donnell - for most folks - might mean calling for a table change or a pair of Beats but this group is having a great time playing together and always has.

After hearing quite a bit from both players, Watchman moves his chips in the middle - barely more than 2x O'Donnell's stack - and there's a snap-call from Marshall who flips over

before any of his chips make the middle of the felt.

O'Donnell grimaces and turns over

The entire board is a blank for both Marshall and O'Donnell, Watchman moving to 150,000, Marshall slipping to an amount I can't tell because I'm too colorblind to figure these chips out.

As for O'Donnell .. stop by Mingle and join him for a cigar and a scotch, he'll be there for a little while.

The bustout brought the field to 27 and the 3-table redraw ...