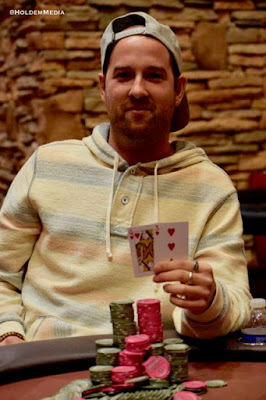 and a call from Jonathan Alley (above). The turn is

and Nuon moves all in. Alley barely pauses and calls off his stack as Nuon has him covered by about 1,000,000.

Alley doesn't give Nuon a chance to double the first two times Nuon pushes, but he calls the third all-in.

Alley has the better flush draw.

, nothing to help Nuon, but the river is

Now Nuon has an open-ended straight draw and a straight flush draw too.