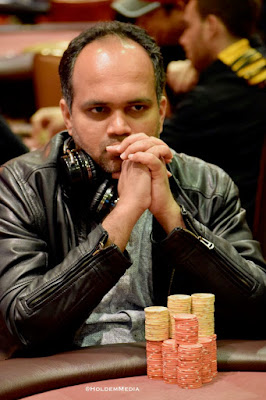 Prasad Inamdar was up to 1,500,000 but dropped a huge pot to Niv Decalo when his straight draw missed. The chips kept slipping away and he just moved all in for his last 8BB with 8T, called by the 6-6 of Kieng Lieng and .. the K-K of Alex Greenblatt. Greenblatt holds and the night is over, the final table all set.

There's not one but two 8's on the flop, a Ten on the turn and Inamdar goes Boat Don't Lie, tripling up, with Lieng losing out to the Kings' of Greenblatt.