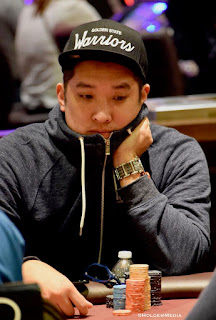 Duke Lee and Steven Jackson mix it up on the flop, with Lee - runner-up here in the Poker Night in America Main Event last year - leading out for 3,600 on the

flop. Jackson repops to 12,000 and Lee takes his time before light 4-bets to around 25,500. Jackson shoves and Lee snap-calls for what looks to be pretty even stacks of around 65k each.

for the flush draw
Lee -

is already there with the straight, and he's dodging the clubs.

and Kerry the Dealer makes the count and Lee has Jackson covered by less than 3BB.

There was a LevelUp as I wrote this, action is now at