Milly v. Milly for a Milly 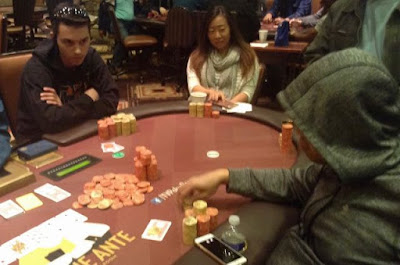 There may not be a pot this big again until down to the final 3-4 players.


Zachary Horton and Makara Nuon crushed their respective Day 1 field, both bagging 900,000-plus. They drew the same starting table today for Day 2, both moved to a little more than 1,000,000 and now have clashed in a massive pot.
Horton opened for 40,000, with Nuon 3-betting from the SB to 110,000 by sliding a stack of orange 5k chips out in front of him. Giuseppe Pedrillo debates moving all-in from the BB< but lets it go, and Horton asks for a count before making the call.

and Nuon opens by sliding another stack of orange 5k's out, this time 140,000. Horton makes the call and the pot is now 515,000. Only 3 other players who made Day 2 started with a half-milly or more in chips, so you get an idea how big this pot is going to be for the tournament.

is the turn and Nuon double-stacks this bet, sliding out two 100k stacks and a pile on top for a 260,000 bet. Horton does not take long before sliding out an equal amount.

Nuon backs up and checks the

river. Horton lets a grin slip out, and he announces all-in. This sends Nuon deep in to the tank, and there's very little communication between the two. More than three minutes pass before Horton calls clock of Nuon.

AndyTheTD comes over and does the countdown - the full countdown - reaching zero and announcing that Nuon's hand is dead.

A lot of action at the other tables took place and a LevelUp happened in the time it took to write this all out, so action is now at