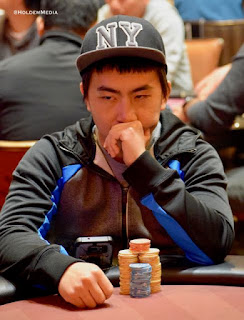 A short-stacked Phil Phongsaiphonh moves all in preflop and gets a call from Tou Xiong (above) on the button.

Everyone else gets out of the way, and Phongsaiphonh turns over A5 while Xiong shows two red 6's.

The 3-4-9 flop gives Phongsaiphonh a gutter, but he does not connect on the turn or river and he is eliminated early in Level 13.

Before I could post this, Tou's sister Mai was eliminated by Turlock Poker Room TD Adam Sanchez. Both of the Xiong's are former Turlock Players Series Main Event champs from 2014 (Mai) and 2015 (Tou).