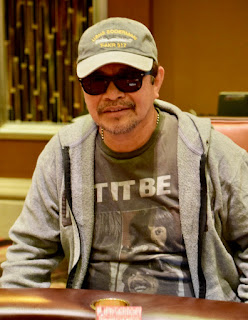 Caharlito Aseberos is now 3rd in @AnteUpMagazine Worlds Player of the Series race, with four cashes in the first 5 tournaments.

Aseberos was one of the 13 players to share top honors in this afternoon's $140 Bankroll Builder. He earned the same 52 Series Points as the other 12 players, but added 20 Bonus Points for this being his 4th series cash. This boosted his series points total to 156, just 10 behind co-leaders Vincent Amayun and Chris Stevens.

Here's the tournament series finishes so far for Aseberos.

Reno's Mason Rosenberg and Sacramento's Martin Gomez each earned their third series cash in the bankroll Builder, so they each earned 15 Bonus Points. Rosenberg (133 points) and Gomez (130) are now 5th and 6th, respectively, on the Series Leaderboard.