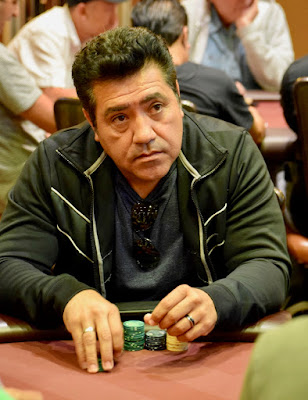 Matt Boddorf is all in preflop, Chris Hinchcliffe moves all in as well, and Uriel Barron (above) calls off his remaining 4,350 preflop also .

So, let's see the cards

Boddorf is around 60 percent to take this down, and Hinchcliffe is calling for a Jack ... until the flop goes A-K-T and Barron takes the lead, with Hinchcliffe now willing to let Boddorf get his Queen.

Is it too early in the day for that much preflop action?