Carrie's Kings Run in to Aces 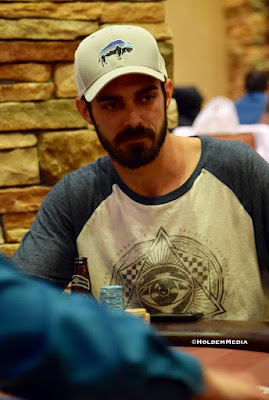 There's a raise to 3,700 by Mason Rosenberg (above) and a call, then Carrie Diggs puts her last 20,000 in. Rosenberg takes a bit of time, then makes the call and the other challenger folds.

Diggs turns over Kings and turns over Aces. Both players understand it was not a slow-roll, as Rosenberg was trying to entice the third player to come along as well.

The 5-6-7- flop gives a runner-runner straight chop as possibility. The Queen turn, and Ten river, however, close out the day for Diggs in 30th place.