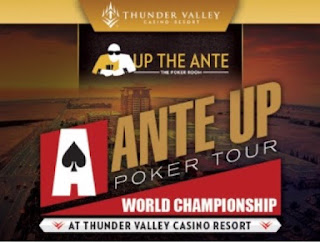 The 2017 Ante Up Worlds awards a $500,000 Guaranteed World Championship seat this weekend to the player with the best finishes from the first 14 series tournaments, plus a one-night stay at Thunder Valley.

While the chase for the top spot is a two-person race, 83 players are still in the running to win one of the three prizes being awarded.

Thursday's Head-to-Head Championship - the final tournament in the series where points can be won - awards 125 points to the winner, enough for Postle to vault over Rosenberg on the final day .... unless ....

Unless Rosenberg makes the final 8 and earns 50 points.

If Rosenberg does not cash, Postle can finish 2nd for 90 points, and get a 25-point Bonus for his 5th series cash, moving him to 340.

The 125 points for the Head-To-Head winner can move any of the players in the top 83 up to 3rd place, so the prizes are up in the air until late tomorrow night.