No Ten on the River 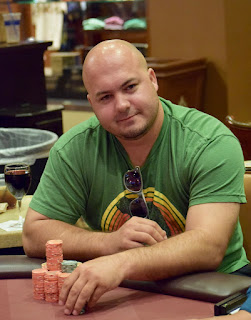 Ken Clark, Jason Sewart and Roger Bailey are all in preflop, with Bailey (above) having the other two players covered .. and he's well ahead.

Bailey - AQ
Sewart - AJ
Clark - 89 as the shortest stack of the three players.

Sewart - one of four who chopped the $125 Event 4 in this series - crushes the A-J-5 flop, however, hitting TopTwo and taking a commanding lead in the hand.

There's always a sweat, though, and a King hits the turn, prompting Charley McLean to say, "No Ten on the river."