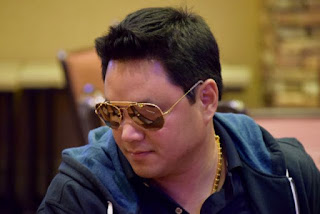 Stay with me here, this one's gonna take a while.

Anton Dimagiba (above) and Khan Saechao are both all in preflop, called by Dylan Lasr and Roger Bailey.

OK, we got that much.

Both players check the 4 turn.

He flopped middle set with 55, had all the players covered and the river corrupts his set, or Bailey knocks out three and moves to a massive chiplead.

Chop it up, nothing to see here, folks.