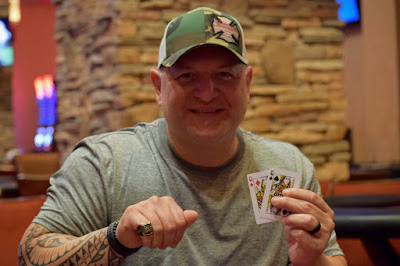 From 11BB at the start of a marathon 5-hour final table to the Last Player Standing, Darren Bortmas of Roseville is the winner of the first-ever WSOP Circuit event held at Thunder Valley.

Play began back on Thursday morning with a surprisingly large 202-entry field, followed by 154 more Thursday night to get the first day of play started with 356 entries. Friday saw with a staggering 560 entries recorded in the single Saturday flight, pushing the total to 1,406 entries.

The $250,000 Guarantee was covered Friday, with Saturday's massive field pushing the prize pool to $421,800. 191 Players qualified from the starting flights to come back Sunday for the final day of play.

Sunday took just 45 minutes of play for 153 players to reach the money.

Al Sanchez bagged 356,000 from the Thursday night flight, and that stack held as the biggest stack moving on from the five starting flights. Sanchez started slow on Sunday, but built back and made the final table, finishing 6th for a $14,742 cash.

Jaroslaw Markowiak was eliminated in 15th place, but reappeared moments later when he wasn't really knocked out, it was only the error by the blogger (me) that had him listed as a KO for about 4 minutes. He became chipleader for a while and wrapped up play in 3rd place, a $33,073 cash.

Sasha Sabbaghian never appeared to be in trouble at the FT, maneuvering his way through the field to being heads-up against Bortmas. He lost a huge flip, KQ < 22, for 75 percent of his chips and never recovered, finishing 2nd for $45,133.

Bortmas was the short stack when 10-handed play began, sitting with just 11BB. He picked up a double, then began catching cards at the right time, igniting a Heater that resulted in multiple eliminations and adding more than 11x to his stack, reaching 6 million at one point with 5 players left.

Once he doubled up 22 > Kq to take a 2.5-1 chiplead, he kept the pressure on, flopping a full house to the flopped trips of Sabbaghian to bring the tournament to an end.

Here are the full payouts