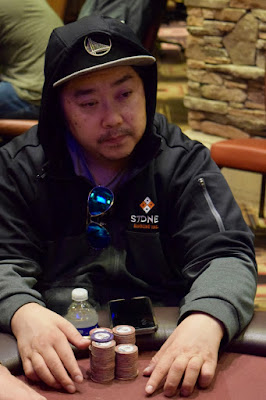 Jae 'Cobra' Pak is all in as the shortstack, Mike Harvey Calls, then Connor Henderson moves in and Harvey calls that as well.

Cobra goes Set with a Deuce in the window (Marvin Karlins would be so proud), but Connor gets the side pot.

Well, make that 6 as Ronald Segni is out in 6th place while I was writing this up, so I missed all the action. Segni cashes for $2,044.