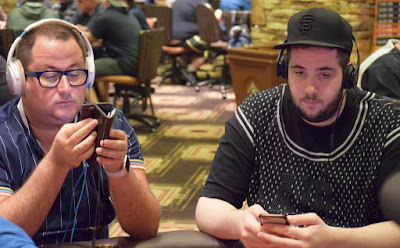 The two players are side-by-side and mixing it up against one another.

Armand looked shaken by the play. He looked at Murray 4-5 times to get any read at all, even to the point of asking the dealer, "It is one re-entry, right?" and still no reaction from Murray.

After about 3 minutes, Armand put his cards in the muck and asked Murray if a) he was on a flush draw and b) would he show one card.