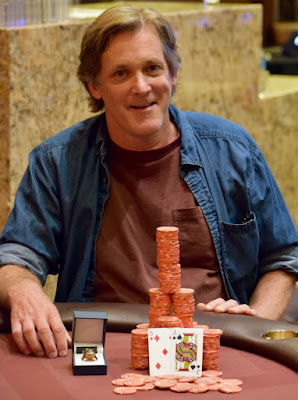 Witek and Lawrence did all the heavy lifting once the event was down to the final table of 10, as the two combined to eliminate seven of their eight challengers.

Lawrence began heads-up play with just about a 2-1 chiplead on Witek and the lead went back-and-forth for about 80 minutes.

Witek finally established a 3.5-1 lead with the two players down to just 26 total BB in play. He completed and Lawrence checked his option, then the players checked a 6-9-7 flop. Lawrence moved all in on the 8 turn and Vitek could not bring himself to believe Lawrence did that holding a Ten.

Witek called and showed J5 for the bottom end of the straight.

Wait, the river is a Ten, there's a straight on the board, chop that up.
Wait, Witek's Jack plays for a bigger straight, and the Turbo is over.

Witek takes home $11,005 and the Circuit Ring as the Turbo Champ.

Here are the full results