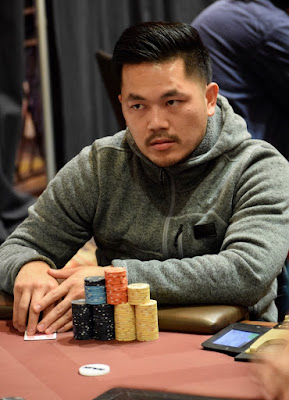 Well, that was over fast, as Mai fropped it ...

gives the short stack a King_High flush but that's Ace_High for Mai and h earns an elimination.

One hand later it is Rep Porter moving all in UTG. One player calls and over-the-top Mai goes again. Same player who opened the previous hand .. again he decides Mai is too scary and he backs away.

Make that back-to-back eliminations for Tuan Mai and a 150,000 stack.