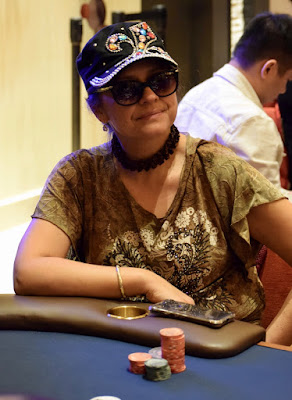 Shayne Crum first seems confused as to whether the 140,000 more from Kahn is enough - it is - then he makes it clear he both does not like the raise and is unhappy about folding his hand.

Everyone else gets out of the way and up go the cards.

More from Crum on the Ace_King_Nine flop as he says he folded Ace_Nine, and he chirps as the turn and river go Ten_Five, with Chiquillo gaining a full double.

"Why'd you do that, now she has more chips," says Crum, "We're supposed to try to knock players out."