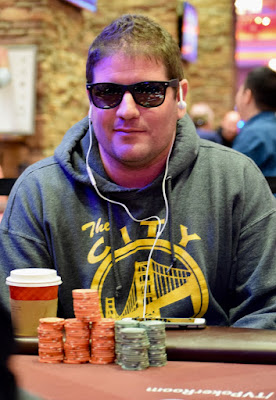 When the @WSOPCircuit @Thunder_Valley series began, Michael Scott (above) had zero tournament series cashes on his poker resume.

Six days ago, that all changes, as Scott won the Monster Stack for a WSOP Circuit ring and a $24,812 cash.

Scott doubled up Hafiz Khan three hands ago, then moved all in on Khan's BB for 515,000, and Khan Called

Scott showed Ace_Six and was racing against the King_Nine of Khan.

Scott turned a straight draw, and Barry Greenstein hit but that Ace on The River wasn't the card Scott needed for his straight and he is eliminated in 5th place, a $47,647 cash.

The final four players - Khan, Greg Guth, Elisa Nakagawa and Roland Shen, are on a 15-minute break. We'll have updated chipcounts on break.