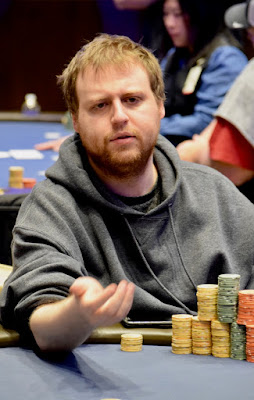 McKeehan (above) makes it 45,000 preflop, his two challengers coming along.

gets a bet and two calls, but it is the

turn that gets everyone's attention.

McKeehen makes it 382,000 and Kniep reluctantly gets out of the way.

Panzica announces all in and McKeehen snap-calls, both players having more than a milly behind.

and finds he just ran in to a set, McKeehen showing

McKeehen is now at 2.45 million, a substantial chiplead with 9 left.