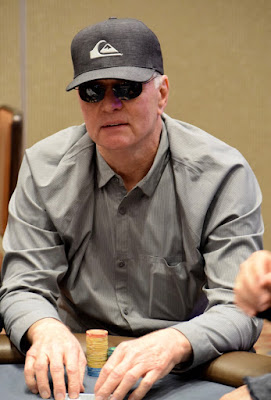 A Queen_High flop and you have Pocket_Kings, you're in pretty good shape, right?

That's Mike Harvey, all-in on the flop with his Kings.

Well, Mike @EastCoastRossyy has Pocket_Sevens and that's a seven there on the flop, middle set.

Turn is a blank, and Harvey stands up, "good game," he says To Ross.

"See, that's how you do it, you have to stand up to get a suckout," says Harvey.

"That was a one-outer," says a tablemate who mucked a King