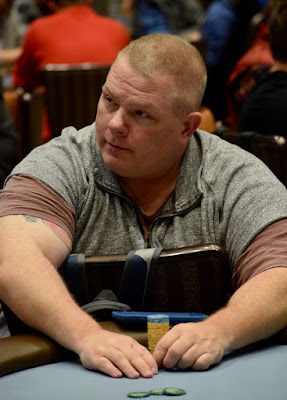 Paul McCaffrey opens for 20,000 as first-to-act, Chris @RUKidingMe44 Hinchcliffe makes it 46,000, Olivier Busquet undershoves for 25,000, action folds back around to McCaffrey who calls.

both players check the flop, then McCaffrey check-calls the 22,000 bet from Hinchcliffe on the

turn - Hinchcliffe tossing his 22k bet in McCaffrey's direction and the latter returning teh action, calling his bet with his chips sliding directly at Hinchcliffe.

turn, Hinchcliffe grabs a stack of 5k chips, placing then out in front as he announces that he's all in as well.

McCaffrey uses up his shot clock before folding, then has a look of surprise on his face when Hinchcliffe tables Pocket_Nines to win the sidepot.

Busquet tales Ace_Deuce and takes the main pot to remain in the Main Event.

One hand later, Hinchcliffe eliminates Rellie Gigua is a bit of an unusual hand. Hinchcliffe opens, Sigua moves all-in for 350,000 and Hinchcliffe believes the players to his right - Mario Lopez and McCaffrey - have already folded so he tables his hand.

Oops, neither had acted. McCaffrey folds his Pocket_Fives, the hand goes on and two fives are on the flop ... ummm, whoa ... while McCaffrey most certainly was not calling off his stack with Pocket_Fives to an all-in, that, um, ouch ...

Hinchcliffe gets a one-lap for exposing his hand with multiple actions pending.