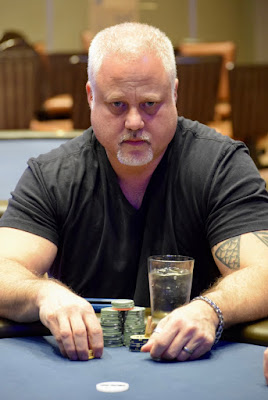 Down to 13BB, Glenn @TheMadScientis8 Larson moves all in preflop over the 50k raise by Paul McCaffrey.

Ian Steinman looks like this one might hurt. He doesn't seem as concerned by Larson as he is with McCaffrey's 1 milly stack.

Steinman calls the all-in and McCaffrey snap-shoves, causing a world of hurt for Steinman, who watches the countdown to a total of 1,077,000, then he folds

Ace_King for McCaffrey .. Ace_King for Larson, nothing to see here, folks, as it is a chop-pot.

Larson shows Pocket-Jacks, flops a Jack, rivers the Case Jack for Quads and moves to 1.05 milly.