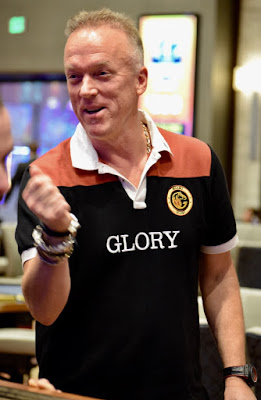 Pat Lyons opens for 100,000, Rayo Kniep moves in for 726,000 and DJ Alexander takes a while before deciding to fold - not long enough to trigger the Action Clock, but enough to fully contemplate the odds.

Calling it a "Sick Play," Lyons calls off 75 percent of his stack and tables

, with Kniep - runner-up in the 1500-entry WSOP Circuit Event 1 here in January - showing

is the turn, and Kniep reacts in grief as a Jack hits the river, but a few seconds later he realizes it is

and while Lyons hit a pair, Kniep caught a flush to survive.

One hand later, Lyons gets Ace_Jack, moves in and Kniep has Pocket_Queens.

Jack in the window, followed by a Queen.

King on the turn and Lyons has a gutter to Broadway ...

Kniep is now to 1.9 million, the field 2 eliminations away from the end of the night.