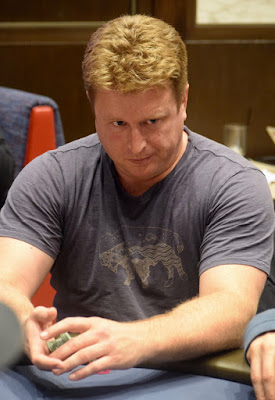 Adam Curchack gets his 2.35 million in the middle preflop with Pocket_Kings and chipleader Sean Marshall calls with Pocket_Jacks.

No help for Marshall on the board and the stacks level a bit, Curchack (above) moving to 4.75 million, Marshall down to 7.6 million.

Two hands later it is Ravi Udayakumar moving all in with Pocket_Sixes and Marshall calling with Ace_Jack.

Marshall blanks the flop, turn and river again and in 4 hands each of the three shorter stacks have doubled.

Udayakumar moves to 5 million, Marshall now at 4.5 million, Curchack at 4.75 and Mike Noori at 4 million .. a massive swing in 4 hands to turn a runaway by Marshall in to 4 viable stacks.