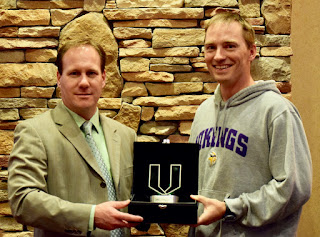 The only player with three cashes in preliminary events during this WPTDeepStacks Series, Jeff DeWitt is the 2017 Thunder Valley Series Champion.

DeWitt circled this event - and the Series Champion title - as goals when he and his wife, Brenda, set out to come here for the 10-day series.

Although he took over the series lead with a cash on Tuesday, he had a sweat into the early-morning hours yesterday, all due to someone he'd run in to twice already on the felt.

DeWitt was the 10th place finisher in the opening event of the series, the 702-entry Action8, knocked out by eventual 3rd-place finisher Eric Smyth.

Needing a cash in Event 8 - the $235 Stacked - to close out all his rivals and secure the title, DeWitt ran his QQ in to the TT of ... Smyth ... and lost when Smyth rivered a Ten to eliminate DeWitt and keep the series title hopes alive for others.

Once last night's Stacked Final Table was set, there was just one person standing between DeWitt and claiming the tile. Care to guess who it was?

"I was sitting upstairs in my room and could not sleep, so I decided to come down," said DeWitt at about 130am when he showed up at the final table to sweat the title in person.

Well, Smyth could not ThreePeat, finishing in 6th place and DeWitt was established as the Series Champion.

Below is everything DeWitt wins from Thunder Valley and WPTDeepStacks for being the Series Champion, along with the full points standings for the top 20 players of the 157 who earned a cash in one of the eight qualifying Series Champion tournaments.